Queen given dominion in hyperspace 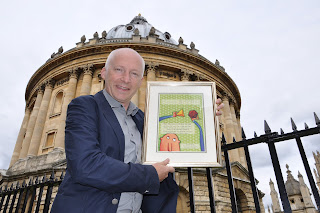 An Oxford University mathematician will give Her Majesty The Queen an unusual Diamond Jubilee gift: her very own piece of mathematical infinite dimensional hyperspace. Professor Marcus du Sautoy of Oxford University’s Mathematical Institute has named a new symmetrical object he has discovered ‘The Diamond Jubilee Group’ in Her Majesty’s honour. However, The Queen won’t be able to take a stroll around her new mathematical domain as this symmetrical object exists beyond our three-dimensional universe. Instead, she will receive a framed certificate from Professor du Sautoy describing in mathematical language the contours of her strange new dominion. The contours of this new shape encode three important numbers: 1952, the year of The Queen’s accession to the throne, 2012, and 60 (the years she has reigned). The Queen’s new symmetrical object is one of a seam of such shapes that du Sautoy has uncovered in hyperspace. He has decided to allow members of the public to name some of the other new shapes in a drive to involve the public in the fundamental research that is done in Oxford. In exchange for a donation to an educational charity that du Sautoy supports he will allow the donor to name one of these as yet unidentified symmetrical objects floating in hyperspace. Visit http://www.maths.ox.ac.uk/naming_symmetries to name your own symmetrical object. ‘Unlike bell towers, ocean liners and Olympic Parks this creation will stand the test of time because mathematical discoveries last forever,’ Professor du Sautoy said: ‘I hope this initiative will give the public a chance not only to get involved in mathematics but also to join The Queen in hyperspace to celebrate her Diamond Jubilee.’ Symmetry is one of the most important concepts in science and underpins many parts of the natural world. Diamond gets its strength from the symmetry of the arrangement of Carbon atoms. The symmetry of a flower is key to attracting bees. Even the particles we’re hunting for in the Large Hadron Collider in CERN are discovered because underlying symmetries tell us where to look. So the discovery of a new symmetrical object always has the potential for exciting new revelations. Naming mathematical shapes has a long history: The fives symmetrical shapes that make good dice are named after Plato: the Platonic solids. Symmetrical shapes like the classic football made from hexagons and pentagons are named after Archimedes: the Archimedean solids. But a strange symmetrical shape with more symmetries than there are atoms in the sun that lives in 196883 dimensional space, discovered in the 1970s, was so daunting it was named ‘The Monster’. Oxford University has a very strong research team exploring the world of symmetry. Professor du Sautoy’s new symmetrical object forges a link with one of the great mysterious in mathematics: solving equations called elliptic curves. Ever since the Ancient Greeks, mathematicians have been trying to find solutions to different equations. Fermat’s Last Theorem, solved by Oxford mathematician Andrew Wiles, proved that equations that generalize Pythagoras’s famous equation do not have solutions. Elliptic curves are the next great challenge. Reported on in The Times , the BBC Website , BBC TV , Wired Magazine
Posted by Marcus du Sautoy at 09:27

Do you have to be an atheist to be Simonyi Professor for the Public Understanding of Science? Is it in the job description? I think we should be told.

Of course not. Check out www.simonyi.ox.ac.uk/aims including Charles Simonyi's manifesto.