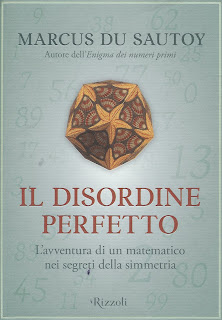 If you can't wait for the English edition then Finding Moonshine has already been published in Italian by Rizzoli. Launched at the Mantova Literary Festival at the beginning of September 2007, IL DISORDINE PERFETTO shot to number 13 (a prime of course) on the non-fiction best seller list.
Posted by Marcus du Sautoy at 09:55 2 comments:

Posted by Marcus du Sautoy at 08:08 No comments:

More about the author 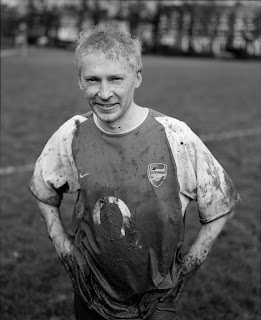 Marcus du Sautoy FRS is the Charles Simonyi Professor for the Public Understanding of Science and Professor of Mathematics at the University of Oxford and a Fellow of New College. In 2016 he was elected a Fellow of The Royal Society. In 2001 he won the prestigious Berwick Prize of the London Mathematical Society awarded every two years to reward the best mathematical research made by a mathematician under 40. In 2004 Esquire Magazine chose him as one of the 100 most influential people under 40 in Britain and in 2008 he was included in the prestigious directory Who’s Who. In 2009 he was awarded the Royal Society’s Faraday Prize, the UK’s premier award for excellence in communicating science. He received an OBE for services to science in the 2010 New Year’s Honours List. He also received the Joint Policy for Mathematics Board Communications Award for 2010 and the London Mathematical Society Zeeman Medal for 2014 for promotion of mathematics to the public.

Marcus du Sautoy is author of the best-selling popular mathematics book "The Music of the Primes" published by Fourth Estate in 2003 and translated into 10 languages. It has won two major prizes in Italy and Germany for the best popular science book of the year. His book “Finding Moonshine: a mathematician’s journey through symmetry” is also published by Fourth Estate and appeared in February 2008. It was longlisted for the Samuel Johnson Prize for non-fiction. His third book The Num8er My5teries was published by Fourth Estate in June 2010. He is also Super Geek Consultant for Lauren Child’s series of children’s books about child spy Ruby Redfort. He is currently writing a new book called “What we cannot know” to be published in 2016.

Marcus du Sautoy writes for the Times, Daily Telegraph, Independent and the Guardian and is frequently asked for comment on BBC radio and television. For several years he had a regular column in the Times called Sexy Science. He was presenter of BBC4’s TV game show Mind Games, for which he was nominated for the Royal Society of Television’s Best Newcomer to a Network award. In 2005 he presented a one hour documentary for BBC4 and BBC2 based on his book The Music of the Primes. In autumn 2008 he wrote and presented a four part landmark TV series for the BBC called The Story of Maths. He has presented five BBC Horizons including “Alan and Marcus go forth and multiply” co-presented with comedian Alan Davies and “The Secret You” a film about the science of Consciousness. In 2010 he presented a six part TV series for BBC called The Beauty of Diagrams. In summer 2011 he is presented a new 3 part landmark series called The Code broadcast on BBC2 to huge critical acclaim. In 2012 he took part in the BBC’s programme Maestro at the Opera making it through to the final where he was beaten by Craig Revel-Horwood. In 2013 he presented the three part series Precision: the measure of all things. He currently co-presents the School of Hard Sums on Dave with comedian Dara O’Briain.

He has written and presented several series for radio including: 5 Shapes for BBC radio 4 in 2004 and Maths and Music for the Essay on BBC radio 3 in 2007 and The Baroque: from ecstasy to infinity for BBC radio 3 in 2009. In 2010 he wrote and presented a ten part series for BBC Radio 4 called A Short History of Mathematics. He gave the Royal Institution Christmas Lectures in 2006 entitled THE NUM8ER MY5TERIES, broadcast on Channel Five. His presentations on mathematics, which include “Why Beckham chose the 23 shirt”, have played to a wide range of audiences: from theatre directors to bankers, from diplomats to prison inmates. In 2009 he was invited to give a TED lecture entitled Symmetry, reality’s riddle.

He collaborates regularly with different artists. He was the mathematical advisor for Complicite’s play A Disappearing Number and the National Theatre’s production of A Curious Incident of the Dog in the Nighttime. In 2013 he staged a special performance in the Lindbury theatre at the Royal Opera House exploring the mathematics of Mozart’s opera The Magic Flute with singers from the Opera House. The same year he collaborated with composer and DJ James Holden on a performance entitled Consciousness at the Barbican. In 2013 his new play X&Y in which he plays X opened at the Science Museum in London and headlined the Astrolabe Theatre at Glastonbury in summer 2014. In 2014 he curated and presented three concerts with the Swedish Radio Symphony Orchestra exploring the connections between mathematics and music.

Marcus du Sautoy plays the trumpet and football. Like Beckham he also plays in a prime number shirt, no 17, for Recreativo FC based in the Hackney Marshes. Born in 1965, he lives in London with his wife, three children and cat Freddie Ljungberg.
Posted by Marcus du Sautoy at 08:08 No comments: 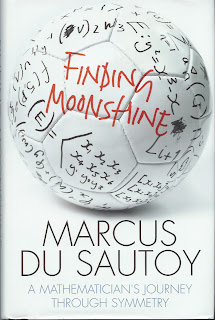 "Finding Moonshine: a mathematician's journey through symmetry" is published in the UK by Fourth Estate on the 4th of February 2007. It will also be published in the US by HarperCollins on the 5th of March with the title SYMMETRY.

This new book from the author of 'The Music of the Primes' combines a personal insight into the mind of a working mathematician with the story of one of the biggest adventures in mathematics: the search for symmetry. This is the story of how humankind has come to its understanding of the bizarre world of symmetry -- a subject of fundamental significance to the way we interpret the world around us. Our eyes and minds are drawn to symmetrical objects, from the sphere to the swastika, from the pyramid to the pentagon. 'Symmetry' indicates a dynamic relationship or connection between objects, and it is all-pervasive: in chemistry and physics the concept of symmetry explains the structure of crystals or the theory of fundamental particles; in evolutionary biology, the natural world exploits symmetry in the fight for survival; symmetry and the breaking of symmetry are central to ideas in art, architecture and music; the mathematics of symmetry is even exploited in industry, for example to find efficient ways to store more music on a CD or to keep your mobile phone conversation from cracking up through interference.
Posted by Marcus du Sautoy at 07:28 4 comments: