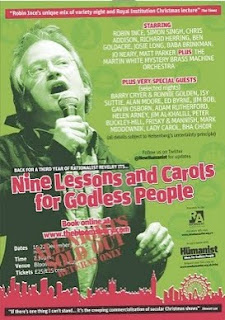 9 Lessons and Carols for Godless People is a show celebrating science at this festive time of year. In its third year, this was my first time performing alongside people like Simon Singh, Robin Ince, Dobby from Peep Show and Chris Addison from In The Thick of It and many other amazing performers.

My spot looked at some of the fun maths in the festivities at this time of year. Take the Jewish festival of Chanucka for example. Already a holiday I love because you have to work modulo 19 to work out when it takes place. Celebrated over 8 days, one of the rituals involves lighting candles on each day. On the first day you light 2 candles, second day 3 candles...until on the last day you light 9 candles. The question every nerdy Jewish kid gets asked: how many candles do you need to celebrate Chanucka?

You could just add up the numbers from 2 to 9 but there is a cleverer way to do this calculation. Look at the triangle of candles you are trying to count:

If I take another copy of the triangle and invert it then I can put the two triangles together to make an 11 x 8 rectangle which has 88 candles in. So one triangle has 44 candles in it.

Not to be outdone, Christmas has its own mathematical problem. While Chanucka involves 2D triangles, the Christmas problem goes one dimension up and uses 3D pyramids. The problem relates to the famous Christmas song: The Twelve Days of Christmas.

So the maths problem: How many presents did I get from my true love over the twelve days of Christmas? Calculating the number of presents on each day is the same sort of problem as counting the candles at Chanucka. For example on the 12th day I get 12+11+10+...+3+2+1 presents. But how many do I get over the whole of Christmas?

This time you need to stack all the triangles in layers so that you build up a pyramid. On the top is the first Partridge in the Pear Tree. On the second layer: a Partridge and two turtle doves. Here is a picture of 4 layers of the pyramid which I made for the performance. 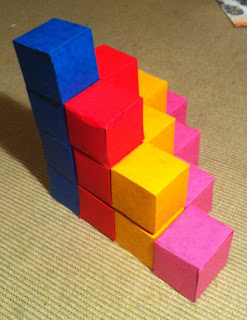 My arts and crafts skills were pushed to the limits. It took me ages making those little boxes so I gave up after 4 layers. That's why I chose maths...you don't have to get your hands dirty with all that UHU glue.

But how can I calculate quickly the number of boxes I would have had to have made to do all twelve layers. Well it turns out that if you take 6 of these pyramids you can rearrange them all to make a rectangular box with dimensions 12x13x14. So the total number of boxes in one pyramid is 12x13x14/6=364. So one present for every day of the year except Christmas!

If Chanucka is a two dimensional festival (triangles), Christmas is a three dimensional festival (pyrmaids) then I thought I should invent a 4D festival to celebrate at the 9 Lessons and Carols for Godless People.
Here is the formula for Chanucka: \sum_{i=2}^{9} i
The formula for Christmas is a double summation: \sum_{j=1}^{12} \sum_{i=1}^{j} i
So the formula for a 4D Godless festivity is a triple summation: \sum_{k=1}^{N} \sum_{j=1}^{k} \sum_{i=1}^{j} i
where N is the number of days in our 4D Godless festival.
I've been getting people to help me via my twitter account (@MarcusduSautoy) to build up this 4D celebration of science. It is also based on a song...

So here are the suggestions via twitter for each additional present.

There has also been some debate about how many days the 4D Godless festival should have:
42 was suggested during one show - a good geeky number.
Infinite was suggested in another show - A very long festival ... especially towards the end.
Someone suggested via twitter 28 since it is a perfect number. Quite like that one.
I've gone for 13 at the moment as that proves I'm not superstitious.

But how many presents would we get from our geeky friend? Well that requires building shapes in 4 dimensions. Something that is beyond my arts and crafts skills.
Posted by Marcus du Sautoy at 16:36 No comments: