Maths on Stage: The Dramatic Life of Numbers 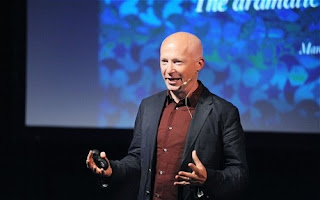 A packed tent for double maths at 10 on a Saturday morning at the Hay Festival was a very gratifying sight as I came on stage for the first of three events I did at the Hay Festival this year. And the stage was the right place to be discussing the exciting fusion of maths and theatre that has emerged over the last few years. I was exploring my collaboration with Complicite on their award-winning show A Disappearing Number and a new show that I am devising and acting in with actress Victoria Gould. This new show is in some sense a baby of A Disappearing Number as it is growing out of many of the themes we explored while developing the play Complicite did on the extraordinary collaboration between Hardy and Ramanujan. We will be giving people a sneak preview of our work in progress on this new piece at Latitude Festival this year when we perform Act 1.

In my event at Hay I wanted to show the audience why the world of mathematics and theatre are actually much closer than you might imagine. On the spur of the moment I decided to use my event to create our own little bit of mathematical theatre at Hay. I wasn't sure whether it was going to work but in the end it was surprisingly effective. A lot of the theatre games that Complicite use to devise their theatre depend on setting up very simple rules that allow the actors just to concentrate on reacting to their fellow actors. Being given the freedom of the stage and being asked to improvise something can quickly lead to a creative freeze. Simple theatre games often allow something unexpected to emerge that no one could plan.

We started with an exercise that I think can look magical. 20 members of the audience came up on stage. I asked each person to silently choose two others on the stage. When I said "go" they had to move to try to create an equilateral triangle with the two people they'd chosen. (The person and the two they've chosen must be an equal distance from each other). Of course the two people you've chosen are unlikely to have chosen you so a strange dance starts to emerge on stage. As the audience members still in their chairs watched on they observed an extraordinary crowd ebbing a flowing on stage, something that would have been impossible to choreograph without the simple mathematical rule. It was chaos in action...and it was very funny to watch. Three girls did end up choosing each other and very quickly stabilised as a still triangle in the chaos. As the scene developed the others began to get close to stability. A stillness across the group seemed to emerge but then one person moved very slightly, obviously trying to get their equilateral triangle perfect. That caused other triangles to become unequal and more people began to adjust. Very soon manic chaos had flooded the stage again.

The second exercise I did was one that actually appeared in the production of A Disappearing Number. I got 5 volunteers from the audience. They came on stage and immediately formed a group of 3 on one side of the stage and 2 on the other. This is called a "partition of 5". The exercise was to find how many different ways there are to partition the 5 people, how many different groupings were there? The members in each of the groups doesn't matter. It's how many there are in each group that is important. When I said "go" 1 member of the group of 3 peeled off. Suddenly we had 2+2+1. One of the couples separated. We had 2+1+1+1. 3 partitions of 5 people had already been found. But then the one that broke off went to join one of the other actors on their own. We'd returned to 2+2+1. It was a different arrangement of people but the same pattern as the second partition. Gradually they went through the other partitions. 3+1+1, a single group of 5 people. Then suddenly one broke off. We had a group of 4 and one actor on his own. You could feel his sense of loneliness, rejection by the group, the strength of the group of 4 staring at him. We'd got 6 partitions. I said that there was one they'd missed. They thought for a while. And then suddenly all separated into individuals on the stage. 5 groups of 1. 1+1+1+1+1. The exercise had discovered all 7 different ways of partitioning 5 actors. But in the process they'd created a poignant piece of theatre. Partition Numbers are a sequence of numbers that Hardy and Ramanujan had great success investigating. If you have a 100 actors how many ways are there to partition them? Hardy and Ramanujan discovered a formula for telling you.

While working on A Disappearing Number I did a number of workshops with Complicite for Drama and Maths teachers. The Drama teachers of course all want to come to a Complicite workshop but maths teachers are a little more reluctant about doing some physical theatre workshops. So we made it a condition that the drama teacher from a school could only come if they also bought a maths teacher with them. Apparently this was the first time many of them had talked to each other in the school common room. As the teachers gathered at the beginning of the session it was quite easy to spot who were the maths teachers and who were the drama teachers. Half of them were waving their arms around, shaking their legs, rolling their shoulders, warming up for a physical workout. The other half were in a corner looking rather shyly at their shoes. However it didn't take long to get everyone buzzing. The maths teachers came into their own and felt more confident as we took them all off on a journey to explore why one infinity might be bigger than another. The Complicite website has a work-pack that was developed out of the workshops which teachers and others might enjoy.

I might add some more to this post but got to rush down to the National Theatre to do some maths with the cast of A Curious Incident of the Dog In The Time. More maths on stage!

Posted by Marcus du Sautoy at 13:12 No comments: