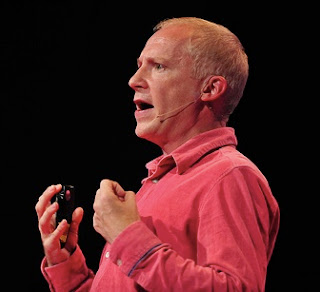 The subject of TEDGlobal 2009 held in Oxford this week was the Substance of Things Unseen. My talk, given in the section Curious and Curiouser on Wednesday, attempted to illustrate how mathematics is a powerful language to allow us to get access to things unseen. In particular, symmetry is superficially about something visual, something seen. We say a face is symmetrical because we can see that the left side is a mirror of the right side. But how can we "see" that two walls in the Alhambra for example have the same group of symmetries although they visually look very different. The power of mathematics is to be able to "see" an abstract entity underlying the object. It's like the concept of number. Do you ever "see" the number 5? No. You see visual representations of the number 5. This is the power of the language of symmetry that the French revolutionary Evariste Galois developed at the beginning of the 19th century. It allows us to articulate why two objects have the same symmetries although they visually look very diffferent.
It also has the power to prove when we have seen examples of all the symmetries possible. In the Alhambra for example, mathematicians proved that there are only 17 different groups of symmetries possible on a two dimensional wall. There are many more than 17 different wall designs across the palace but they are all examples of one of these 17 symmetry groups. For example, these two walls look very different. But the language of symmetry allows us to explain why the underlying symmetries are exactly the same: 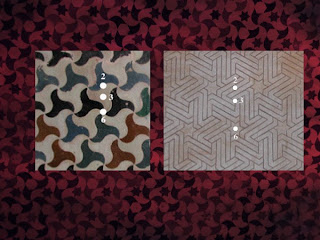 This allows us to explore the symmetries of things seen. But the real power of mathematics is to create symmetries of things unseen. My work concerns creating symmetrical objects that exist beyond our three dimensional visual world. Only with the power of mathematical language can we "see" in 4, 5 even infinite dimensional space.
To celebrate TEDGlobal 2009 I constructed a new symmetrical object that cannot be seen but using mathematical language can be explored and played with. It was won in a competition I ran during my 18 minute talk by another of the TED speakers astronomer Andrea Ghez.

TED blog entry about my talk

Groups for Charity If you want your own "unseen" symmetrical object, then a donation through my FirstGiving page to the charity CommonHope will get your name on a new mathematical shape.
Posted by Marcus du Sautoy at 08:43 No comments:

This week saw the last column in the Sexy Maths series in The Times for the time being. The newspaper is downsizing for the summer. It may reappear in a new reincarnation in the autumn. Here is an archive of links to all the columns that appeared during the year, some including the beautiful illustrations of Joe McLaren who will be illustrating my new book The Num8er My5teries.

1 Jul 2009 Oh, it’s such a perfect day. We have discovered 47 perfect numbers — the largest has nearly 26 million digits.

24 June 2009 How to avoid a grudge match. Never mind Arsenal against Spurs. How about NP versus P?

17 June 2009 Arithmetic eases swine flu. Figuring out the rate of contagion can make you feel better

10 June 2009 When it pays to play the odds. Mathematicians, and the laws of probability, can tell you whether to have a flutter, or keep hold of your money.

27 May 2009 A new bicycle reinvents the wheel, with a pentagon and triangle. Guan’s bicycle isn’t the first to exploit these shapes — they have been used by urban planners as manholes.

20 May 2009 A game of 12 pentagons. Why a football match is actually geometry in motion.

13 May 2009 in search of the poetry of Muslim symmetry. Galois’s group theory allowed mathematicians to articulate the theory of symmetry.

6 May 2009 Formula won ... the key to boosting faster travel. How mathematicians can get you to the Grand Prix finishing line — and through an airport — more quickly.

29 April 2009 The lemming theory. There is no mass suicide pact keeping the numbers of lemmings down.

8 April 2009 Drawing parallels in geometry. This year's Abel Prize honours some of the most revolutionary contributions to geometry since those of Euclid.

18 March 2009 Twists and turns that make a rollercoaster ride.

25 February 2009 Tails of a curious submariner. A US Marine with a lot of time on his hands has noticed that a strange thing happens when you keep tossing a coin.

18 February 2009 How to be a flipping genius. It's possible for me to toss a coin and you, who are somewhere else entirely, to know if I have called honestly.

11 February 2009 Why Palladio's proportions are pleasing on the eye and the ears.

4 February 2009 Why do snowflakes have six arms? Are your children out of school? Keep their grey matter going with a question that baffled generations of scientists.

14 January 2009 Solving wobbly restaurant tables. Wedging beer mats or bits of paper under that annoying table leg is no more. Try the mathematical solution instead.

7 January 2009 Survival of the mathematician.

10 December 2008 The symmetry of sneezing. Viruses blight many people's lives in winter but the molecular structure of many are things of mathematical beauty.

26 November 2008 Skills of a chess grandmaster.

15 October 2008 Sexy maths: a calculating approach to love. Mathematics can help you to maximise your chances of landing the best flat – or the best partner.

8 October 2008 Happy (birthday) coincidences. Why Premier League footballers are likely to have dates of birth in common, and how to win more money on the lottery.