The book has been reviewed extensively.

Sunday Times Lisa Jardine reviewed the book for the Sunday Times and described it as "mesmerising".

The Guardian Tim Radford thought "Finding Moonshine adds up to a wonderful read. This is a marvellous account of a 4,000-year obsession with symmetry and the secret language of nature."

Sunday Telegraph The beauty of Patterns. "Marcus du Sautoy knows how to tell a story and, even more important, how to make difficult ideas palatable and even entertaining" write Graham Farmelo.

The Economist Mirror Games. "It makes for a fascinating and absorbing read."

Times Higher Education Chosen as Book of the Week. Reviewed by Timothy Gowers, Rouse Ball Professor of Mathematics at the University of Cambridge. "he has pulled off that rare feat of writing in a way that can entertain and inform two different audiences - expert and non-expert - at the same time...What makes the organisation of the book so successful is that it allows du Sautoy to develop one part of his story and then leave you in suspense while he moves on to another. This is of course a well-known literary device, and du Sautoy is very good at using it: he knows just how much information to reveal to keep you interested. The result is a gripping book with a strongly novelistic flavour."

Independent A monster hit for the maths world. Reviewed by Apostolos Doxiadis, author of Uncle Petros and the Goldbach Conjecture. "At the book's core is the mathematical story, which du Sautoy tells with the narrative flair and storyteller's sense of detail, development and suspense also exhibited in his first book, The Music of the Primes. ... it gives an inspiring testimony of what it is like to be a research mathematician."

Sunday Independent Symmetry is an asset prized by nature and man alike. Just ask a mathematician. Reviewed by Simon Ings. "Finding Moonshine is a superlative mathematical entertainment; not pretty to the purist eye, but oh, so effective."

Financial Times The nature of symmetry. "Even if you understand little of the mathematics involved, it’s a fascinating tale " writes Alan Cane. 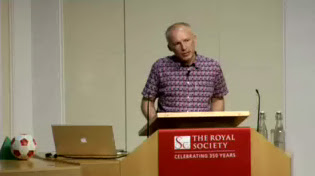 The following is a partial list of talks that I have given or am about to give based on the book.

18 June 2008 Oxford Science Centre. You can see a video of this talk Pulse Project
Posted by Marcus du Sautoy at 08:29 No comments: