Behind the maths block 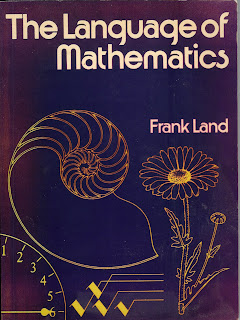 Many people emailed me after hearing Desert Island Discs to ask about what books did my teacher, Mr Bailson, recommend to me behind the back of the maths block when I was 12.

The book which had the biggest impact was

You can read a description of the effect of this book on me in Chapter 1 of Finding Moonshine.

This book made me realise that maths was as much a creative art as a useful science. I was very lucky to have the chance recently to work on Complicite's recent play A Disappearing Number based on the book.

The other thing my teacher recommended was reading Martin Gardner's regular column in Scientific American full of great recreational maths and puzzles. You can get many of these collected together into books.

We were also lucky to do something called the School Mathematics Project or SMP at my comprehensive school. The course taught us about group theory and topology and other exciting topics that count as real maths. I was fortunate to have a teacher who understood the ideas.

I was also lucky to go as a 13 year old to the Royal Institution Christmas Lectures in 1978 when they were first done on maths by Christopher Zeeman.

I was very honoured to be asked to give them my self in 2006. Called The Num8er My5teries they are aimed at 11-16 year olds. You can get a free DVD of the lectures from the Royal Institution and there is an accompanying website full of games

Also I am currently writing a book based on the lectures to be published in 2009 which I am hoping will make perfect material to recommend behind the back of the maths block. It will be called The Num8er My5teries.

Other books in addition to my own that do a great job at inspiring budding mathematicians:
Any book by Rob Eastaway, Ian Stewart, Robin Wilson or Keith Devlin.
The Number Devil by Hans Magnus Enzensberger.
1089 and All That by David Acheson.

Also look out for my regular column Sexy Maths in The Times on a Wednesday.

The Royal Institution run Mathematics Masterclasses for children which are worth checking out. Here is the link for the Masterclasses in London.
Posted by Marcus du Sautoy at 09:27

Thank you so much for this list. We have just watched your 'Horizon' programme and the children, and I, are keen to learn more.
Outstanding!